The Pavilion in its present state has become an iconic landmark to most Henfield players and residents. The distinctive frontage with its triangular shaped clock area in the middle long covered porch and bench seating stretching along the total length, is loved by cricketers and spectators alike, resulting in the pavilion retaining its old world charm which is so very much in keeping with the club’s long history.

Prior to the 1914-18 War tents were erected for matches, as matches were not played that often. After the War, matches became more frequent and using tents was no longer viable; it was also a lot of work to dismantle and put-up these tents every week-end, so the cricketers got together and decided to provide a hut (pavilion).

The original pavilion was built in 1926* and was constructed totally by volunteers. According to Dr John Squire’s book ‘Henfield Cricket and its Sussex Cradle’ a local builder, Mr Baigent, offered to provide the materials free of charge, if people would do the work in their own time. Work duly started on the 6th April and with over 1000 hours of voluntary work the pavilion was opened by A. E. R. Gilligan, Sussex C C president as well as ex Sussex and England captain, on the July 19th which turned out to be a day of continuous rain.

As the original conception of a hut had expanded into a far more pretentious building, it was agreed to reimburse Mr Baigent total of £250.11s.11p made up from personal contributions, Whist and Crib Drives, Jumble Sales, Concerts and a Sports Day left Mr Baigent only £31.13s.13p out of pocket out of a total outlay for materials of £282.5s.0p.

The pavilion was built with the distinctive triangular front but with vertical timbers and white painted infills. There was no veranda, only a concrete slab and pull down shutters with long steel support poles to allow spectators to see the cricket from inside the pavilion (see attached photo) and when pulled down a very safe form of burglar proofing. 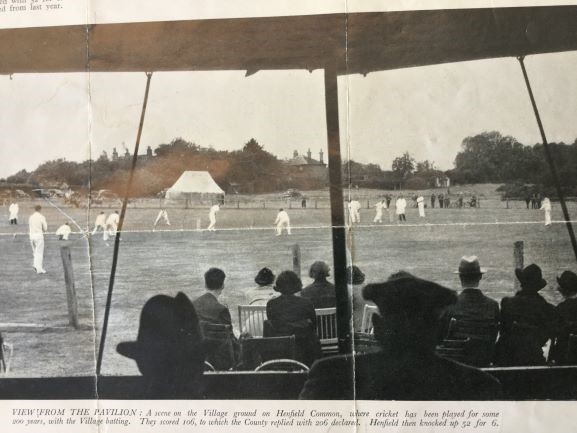 In 1983, under the presidency of Frank Mayston, the pavilion underwent a major refurbishment involving the complete renovation of the existing interior, together with an extension to the north end of the building, resulting in the layout that we have today. Perhaps the most important addition of this refurbishment was the addition of the bar that would provide extra income in the years to come and which has proved very important to the running of the club.

Four important changes have been made to the pavilion since 1983. The first was when, very early one morning in 1994, one of the cricketers, on his way to work, noticed white vans parked by the pavilion, when he investigated them they quickly drove off. It transpired that the men were in the process of stripping the roof of its antique roof tiles. After this scare it was arranged for a local builder to take away the remaining tiles and replace them with new common concrete type, with no cost to the club. The next occurred in 1999; the then president John Mitchell donating benches for the whole veranda area thus providing seating for all. What better place could there be on a hot summers afternoon/evening with a cool glass of beer on hand, sitting watching cricket from these benches. The next important change was in 2009, Tony Adfield the then president, refurbished the existing score box with an electronic score board, meaning that scorers now no longer had to keep jumping up and down to change everything by hand, it was now done automatically. Lastly, in 2008, a picket fence replaced the chained off area in front of the veranda, this served two purposes, one it provided a deck chair watching area for the cricketers, while also giving the nursery, who rented the pavilion during the week, a safe area for the children to play in. This grassed area was replaced with synthetic grass in 2016 which cured the problem associated with overuse.

The iconic triangle over the door has gone through many transformations, starting with the vertical timbers and white painted infills, followed by large H.C.C. letters and the date of 1773 (?), then just painted white, followed by gothic type H.C.C. letters with the date 1771 above, then again white painted but now with a large clock in the top middle, then later with 17 & 71 inscribed either side of the clock and standard H.C.C. letters underneath, until we have what we can see today with the clock at the top and HENFIELD C.C. 1771 underneath.

The pavilion has been home to not only the Cricket Club, but also to a children’s nursery for the last 30 years, the football club from 1953 to 1997 and to stoolball and ladies hockey teams in the 50’s and 60’s, and has over the years hosted birthday parties, weddings, wakes and receptions etc. etc.

It has witnessed much history and now stands as a proud landmark presiding over one of the oldest and most iconic cricket clubs and pitch in Sussex.